Referred to as the “Mother of all churches in the world”, the Basilica of St. John Lateran constitutes the perfect linkage between the pagan and Christian eras. Created, in fact, for public meetings and administering justice, with the spread of the new faith it was turned into a imposing ecclesiastical building, capable of welcoming a large congregation.
The Basilica stands on the site of another built by the Emperor Constantine at around 314 A.D. in the grounds of the noble Laterani family, from whom the entire area gets its name. Repeatedly damaged (often as a result of fires) and restored, the basilica was embellished with a series of artistic treasures and adornments accumulated over the centuries.
Behind Alessandro Galilei’s eighteenth century façade lies Borromini’s magnificent interior, commissioned by Pope Innocent X for the Jubilee Year in 1650.
The whole five nave-structure has survived well-preserved through the ages, as indeed has the sumptuous sixteenth century coffered ceiling gilded with real gold in the central nave.
Your stay should now continue with a visit to the museum, where a number of precious liturgical artefacts are kept, as well as to the cloisters, a masterpiece of the Cosmatesque style where relics of the architecture, sculptures and decorations of the ancient basilica are exhibited.
Pubblicato da Unknown a 03:05 Nessun commento: 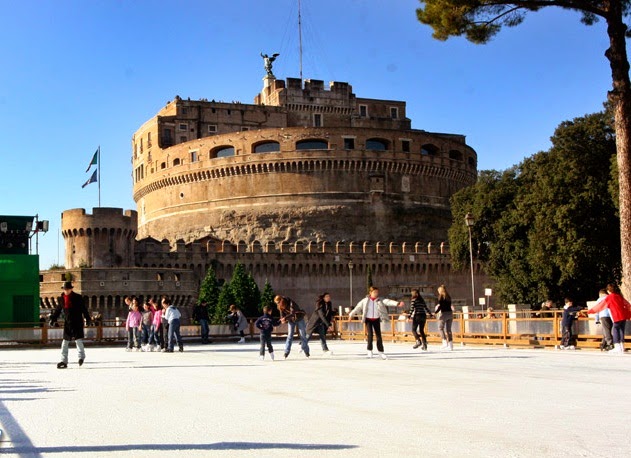 In the Christmas period in the city ' of Rome breathes a unique atmosphere : the streets are lit up with thousands of lights , the streets are filled with stalls selling sweets and glittering decorations and numerous skating rinks are set up for the enjoyment of young and old . In Rome in this period Not That There's the ' spoiled for choice : Grinzing Village 05/12/14 - 19/01/15 A track of 800 meters squares , in the picturesque setting of Castel Sant'Angelo , to be able to twirl Throughout the period of the Christmas holidays and beyond, Together with the children . The structure , perfectly integrated in the frame and nda Traditional Symbols of the Christmas holidays , and open daily with hours no- stop From 10 to 24 and offers the possibility of athletes and curious to try their hand at one sport practicable without SPECIAL Problems safely and - with few technical lesson - Even Correct . The track, which has a capacity of about 150 PEOPLE , provides instructors to accompany Degree Qualified in both adults and children nia Their First Steps on the ice . From 12/09/14 to 06/01/15 It Turns Ice Station Stazione Tiburtina An ice skating rink , with entertainment and diverse entertainment . Ice Park - Tor di Quinto 25/10/14 - 05/01/15 Open daily with the Following hours: Monday to Friday : From 10 to 13 , from 17 to 18 and from 21 to 24 ; Saturday from 14.00 to 24.00 ; Sunday from 10 to 13 and from 14.30 to 24.00 . In December , every Saturday and Sunday from 16:00 to 19:00 , the hoot of Santa Claus . Enter please your design . will participate in the competition " The award of Santa Claus ." Ice Park - Euroma2 29/11/14 - 01/03/15 Location really impressive for the new village Ice Park in Rome. Here , one from Leaving ' December 8 and up to March 1 , Sara can skate on our track and approach this sport so much fun and loved Especially More Dai Young . Ice rink - Porta di Roma 11/22/14 - 02/28/15 EVERY weekend One ice show : November 30 and December 14 : Musicals on Ice ; 6 and 7 December : Piazza Grande ; 21 and 22 December . Cristmas Carol . For the little ones , AFTER EVERY show, possibility of price the photo with the goblin " Harold " .
Pubblicato da Unknown a 02:36 Nessun commento: 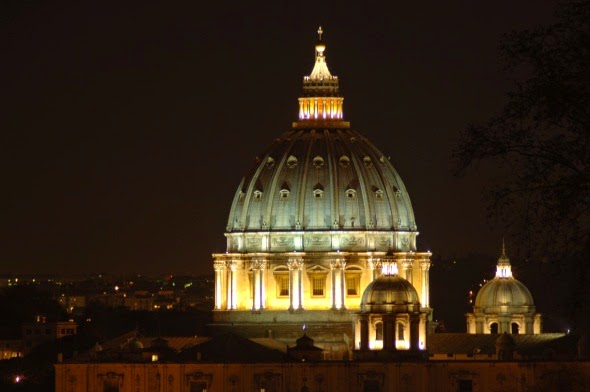 The view onto the dome of St. Peter’s from Via Niccolò Piccolomini is an experience not to be missed.
From here, in fact, the dome may be seen … from quite a unique perspective.


Walk along the road, keeping you eye on the dome, and the nearer you get, the further away the dome seems to go. If you move back, the dome on the other hand appears to get larger and nearer. It is a  magical illusion, a fascinating perspective fooling the eye. It is all the more effective as the object in question is St. Peter’s dome; a strange optical illusion, which is attributable to the layout of the buildings.
A magical illusion making Via Niccolò Piccolomini quite exceptional as well as an ideal spot to end your day out in the city centre or, why not, to make a romantic evening even more special.
Pubblicato da Unknown a 01:50 Nessun commento: